Topic:   Physics of the seasons, Earth-Sun relationship, Rotation, Translation,Natural cycles according to the hemispheres,Time zones

Abstract:
This learning proposal aims for students to learn in a deep and meaningful way the natural phenomena due to which facts occur that are very integrated in our daily lives such as the passing of the hours, day and night, the seasons of the year, the changes in lighting and duration of the hours of clarity along these and the differences in this sense on the globe.The proposal explores the movements of the Earth while connecting with art, music and body expression, with the use of technology with a BYOD approach. It is designed to be implemented in the first year of ESO and has a duration of approximately three hours, but it could vary depending on the depth that you want to develop. In addition, it is a proposal that can be developed perfectly at the beginning of a project, as it has “trigger” elements that invite to explore and go further from the learning generated in this proposal.

Learning Objectives:
To know the movements of the earth as they relate to everyday phenomena such as: day/night cycle; time fusions on the globe, the passing of the seasons; rotation, translation, the earth’s axis of rotation, the earth’s orbit. Content of the ESO curriculum: Scientific-technological area.

Advisable age of students:  12-13-14 years . Attention to diversity and inclusion aspects to have in account

1. Through the Mentimeter tool, the 4 images of the 4 seasons by Giuseppe Arcimboldo are projected, each one of them separated and with the question: What season of the year do you think it is? The pupils, using their own mobile device (BYOD) or in small groups if there are not enough devices for everyone, answer the questions. From the answers and reflections, a conversation is generated about the images themselves and how the art can be related to the different natural elements in each image that respond to each of the seasons of the year.

2. Then, with the images projected, two minutes of each of Vivaldi’s four seasons are played, with the incentive of being able to identify which music corresponds to each season, and therefore to each image. Once the images have been identified, a conversation is generated about the fact that nature can be explained and understood through art, be it painting or music. An example is the authors of the works presented, which were also from earlier times. Through the themes that emerge in the course of the conversation, different topics can be presented, such as the relationship of colours, rhythms and seasonal changes of the year, etc.

3. After the different questions that have arisen in the previous phase, together we will investigate the phenomena that make the seasons of the year exist, with the aim that the students share their previous knowledge in order to ask other questions such as:

– Why are the days shorter and the nights longer in winter, and the other way round in summer?

– Does this happen all over the globe at the same time?

– Does anyone have relatives in another hemisphere, that is, in another country that is different from our hemisphere? If so, do the seasons work the same as they do here?

– And the hours? Are they the same here as there? Does it depend on the northern or Southern Hemisphere, or are there also differences between east and west?

It is important that the answers are found through exploration and representation, which will be done in the next phase with the support of the teacher.

The scenic representation can help to solve doubts and misunderstandings about the concept. This is a clear example: if the pupils represent the translation Earth around the Sun, they will realize this is not enough to explain why the seasons are opposite in opposite hemispheres. To explain that phenomenon the tilt of the Earth rotation axis will have to be introduced

In short, it is advisable not to give answers to the students, but to encourage them to find the answers through interpretation and theatrical representation.

Development: There are two types of phenomena to be represented:

– Day and night (rotation), and time difference in different parts of the Earth (east to west).

– Seasons of the year (translation and tilt of the Earth’s axis).

The dynamics is done in this way:

1.  In groups of 4 or 5 people, students explore and look for answers through videos or Internet simulations of the phenomena associated with rotation and translation: solar illumination of the hemispheres, time fusions, position of the Earth – Sun, etc. (In the resources’ section there are different links with examples).

3. The pupils will write the script and perform the play for a maximum of 10 minutes. They will do so by debating and discussing the different phenomena they have worked on with the aim of going deeper into them. In addition, they will be supported by the teachers.

4. They can set their performances to the music of the 4 seasons by Vivaldi, for example, and with the movements of their bodies express the emotions inspired by the music, the colours of each time of the year in question.

5. The performances prepared by each group can be shared in two different ways:

– Performing them in person in class.

– By viewing the recordings that each group has made of its own performance.

1. In a large group, the 5-6 live performances are staged or the videos that have been recorded are viewed.

2. After each of them, the group that has performed them shares the learning generated and experienced throughout the process. Afterwards, the whole group discusses whether the interpretations are in line with the concepts presented and with reality, and whether they are comprehensible.

3. Finally, the experience is reflected upon as a group.

When considered appropriate and if there has been a deep learning of the previous concepts, precession and nutation can be introduced at a later stage.

Once the students have learned through the representations why the physical phenomena associated with the seasons of the year and the phases of the day (translation, rotation, tilt of the axis), the learning proposal can be continued in different areas, such as physical education and artistic expression through the following dynamic:

1. Individually, students are asked to choose one of the 4 seasons of the year and through re-listening to the chosen season by Vivaldi using their own mobile device (BYOD), notice what their body is telling them and write it down on a piece of paper. You can move around the space if you need to.

2. Once they have done the first step, create small groups based on the chosen seasons of the year. That is, you create 4 groups, one for each season of the year, made up of the people who have selected each season.

3. Once the groups have been created, the challenge they have to solve is to prepare the representation of their season through the body, movement and silence. To do this, they will have two minutes of music from each of Vivaldi’s seasons.

4. The steps to create the performance can be:

– Individually share what they notice they have written down on the paper and come to agreement through similarities between each person in the group.

– Another way could be to freely decide what to do without sharing anything they have individually done, generating a collective construction from the beginning.

5. Finally, the 4 creations are performed by the pupils. When a group makes its representation, the rest observes and tries to find the connections between the movements of the body and the characteristics of each corresponding station. To do this, each group will have 2 minutes to perform.

6. Once all the groups have performed, a reflective debate is held on how the experience went, the learning generated, etc.

The persistence of ideas: At the beginning of this chapter, the author explains how in a survey of 23 Harvard graduates who had gone through the explanation of the seasons of the year 3 times during their school and academic life, they continued with the erroneous idea that they occur because the Earth’s orbit is elliptical and in the summer the Earth is closer to the sun than in the winter. They had not reflected on the fact that the seasons are opposite in the southern and northern hemispheres, and that therefore the explanation they gave could not be true. In reality, the ellipticity of the Earth’s orbit is very small, and the seasons are caused by the inclination of the Earth’s axis with respect to the orbital plane, which is why the seasons are opposite in the different hemispheres. The author reflects on how preconceived ideas tend to prevail even if they are mistaken, and that the way in which students approach knowledge at school does not guarantee that they make meaningful learning.

3- Simulations and visualisations day and night, time zones and differences in the length of the day according to latitude: 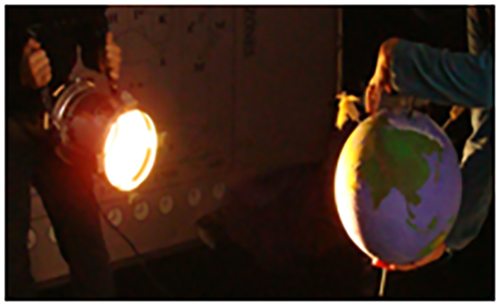 A yearly journey through the four seasons